Can monerod run stable on a Raspberry Pi 3 with microSD as storage?

I have a Raspberry Pi 3 and a microSD card (Samsung EVO+ 256 GB with advertised 95 Mb/s read and 90 Mb/s write). I'm using Ubuntu Mate 16.04, pretty much default setup (just added x11vnc for convenience). I have a 228 GB file system dedicated to the Monero blockchain (symbolic to it from ~/.bitmonero so I don't need to pass --data-dir on the command-line):

I managed to get the Monero blockchain synced by:

After that, I was able to synchronze my Monero wallet from another computer using my internal Raspberry Pi 3 node, and could successfully send a transaction to someone.

Unfortunately, after a day, I noticed my Raspberry Pi 3 node had freezed up. Rebooting and restarting monerod wouldn't succeed anymore catching up with the newer blocks. After a minute or so, the system would again become completely unresponsive. I tried it a couple of times, but to no avail.

The command I used to start my daemon was (tried all kind of sync sizes):

No my question(s) are:

After reading some of the instructions over at http://pinode.co.uk, I think I found the culprit. Turned out Ubuntu MATE for Raspberry Pi doesn't install with swap space out-of-the-box. I wasn't aware of this.

I have now added a 1024 MB linux-swap partition on my microSD card with GParted. I won't be very fast, but at least it's there. 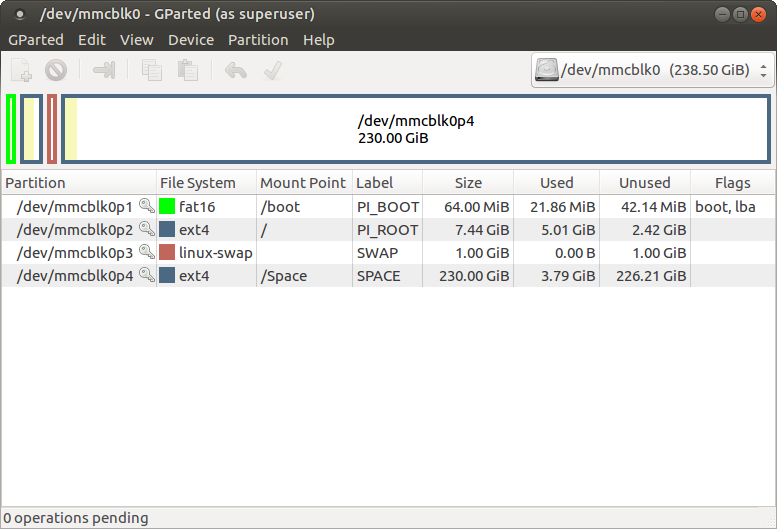 Therefore, I also reduced the "swappiness" from the default 60 down to 0, which should reduce the tendency to use swap, unless absolutely required:

To make the change permanent, edit /etc/sysctl.conf as root:

And add the following line:

Output of the free command when starting up monerod shows free memory takes a nose dive from ± 710 KB:

After monerod was fully synchronized again, it seems my Raspberry Pi 3 system is using just a little bit of swap space:

That's probably why it system crashed previously without that swap ability.

I don't know exactly how to configure these newer Linux systems in "runlevel 3", if that still exists, to even consume less RAM. As a workaround, I have stopped some unnecessary services:

If anyone has a better suggestion for that, feel free to comment or edit.

Not the answer you're looking for? Browse other questions tagged monerod raspberry-pi or ask your own question.

7
Are the LMDB files cross-platform compatible?
15
Why does `monerod` on Raspberry Pi 3 with a copied LMDB not catch up with new blocks?
2
monerod does not start to sync via my dsl connection, but it continues to sync when I start via other connection
3
Difference between --rpc-bind-ip 0.0.0.0, or loopback, or actual IP
1
monerod crashes after several minutes with no errors
0
Monerod constantly in sync by lagging behind 2 blocks
0
Is there any build options that compiles monerod better optimized for x86-64?
0
Is this an optimal setup for solo mining XMR?
1
Failed to check for map support: write failed: No space left on device
0
Monerod synchronization so slow it can't catch up to Blockchain on Raspberry Pi 4 + SSD