What is the difference between Monero (XMR) and CloakCoin (CLOAK)?

I have heard that CloakCoin uses a number of technologies to achieve privacy. What is the difference between these privacy technologies (if any)? I heard that CLOAK uses something called Enigma to provide privacy. Which privacy implementation is better, and under which circumstances?

CloakCoin's "Enigma" protocol is essentially a mixing protocol similar to CoinJoin or PrivateSend in Dash. This is very different than Monero.

Here is a diagram provided by Enigma on the mixing process: 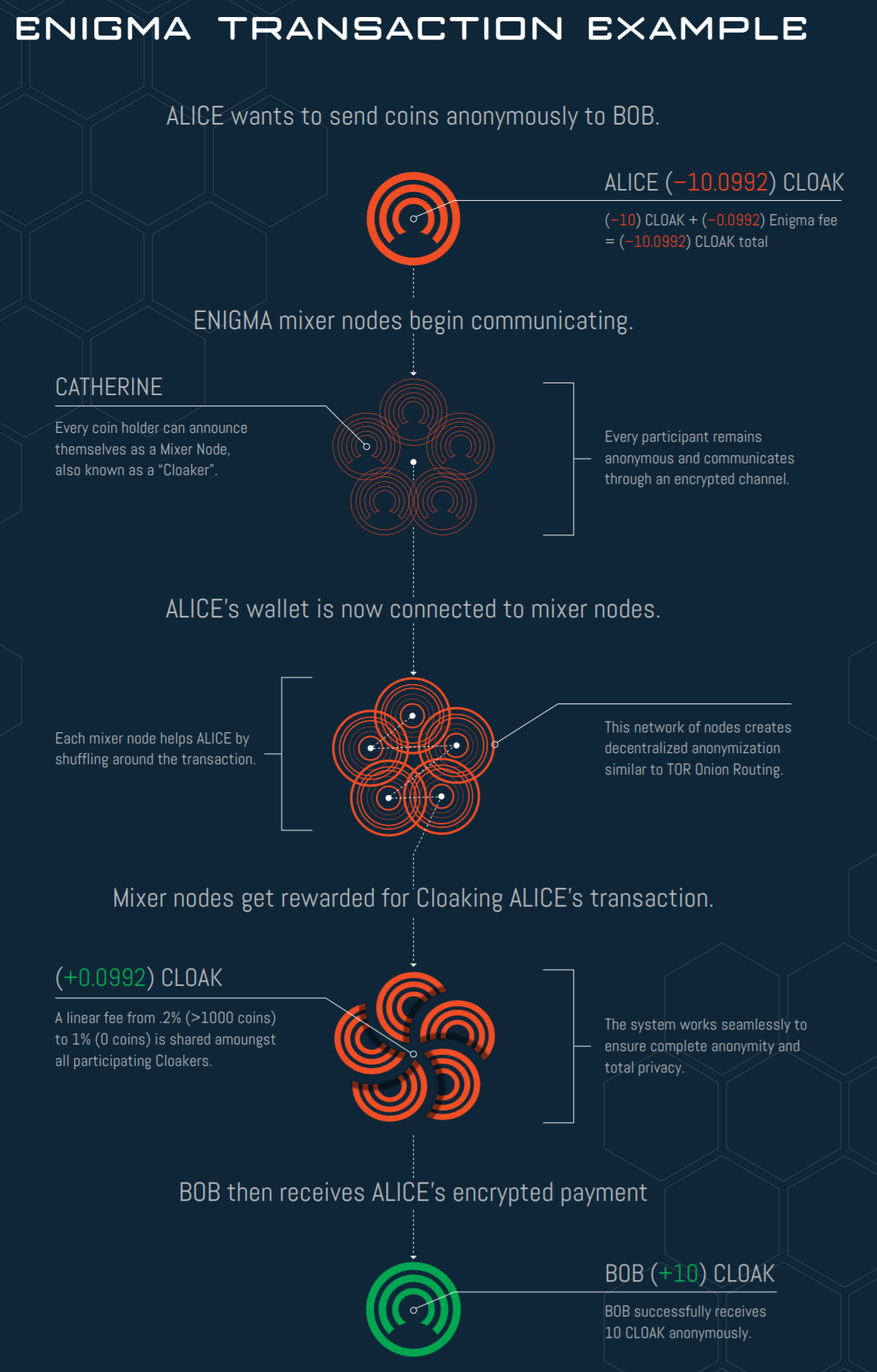 The nodes mentioned above get "entropy" from coins provided by the mixers themselves.

Unfortunately, this mixing process has significant shortfalls. Here are some of them:

Tor is a network-layer of communication, not a consensus layer. While it is important to hide this metadata (including IP address), it is less essential than hiding information recorded in the blockchain. Tor doesn't protect you alone if you make an in-person purchase, for example. Furthermore, there are other ways to hide this metadata, including using WiFi at a coffee shop, a trusted VPN, etc.

"Super-transactions" are not a new idea. The intent is to "condense" the history of multiple transactions into one. For example, if money was transferred between addresses A -> B -> C, it could theoretically be condensed to A -> C. Unfortunately, the whitepaper is light on details on how this could be accomplished, so we have no idea how effective (or ineffective) this could be. Other projects like Grin take advantage of a similar idea. Again, this feature needs to be fairly widely-used to be effective.

Monero uses three cryptographic technologies to provide privacy for all transactions. Ring signatures hide the origin of funds spent by hiding the real output among other sources of money. Ring confidential transactions (RingCT) hide the amount. Stealth addresses break the link between sources of funds and addresses (making rich lists impossible). You can learn more about each individually by searching around in StackExchange and watching the linked videos.

Perhaps most importantly, you can use Monero without having to worry about trust. The math is prepared locally without needing to communicate with clients to "mix" anything.

You do not need to pay a percent fee to the "cloaker" nodes to provide their entropy. The standard Monero transaction fee is based on transaction size, not the amount. This makes Monero far more efficient when sending medium or large amounts.

Finally, Monero has the network effect of all its privacy features being supported by all its merchants and wallet providers. If CloakCoin is ever accepted by a service, it is likely they will not support all of CloakCoin's privacy features.

Overall, CloakCoin (CLOAK) uses privacy mechanisms that are inferior to Monero in essentially every way.