Want to improve this question? Update the question so it focuses on one problem only by editing this post.

I'am very new at crypto currency minning so you could find my questions very basics. Feel free to downvote, no hard feelings.

Why did I choose Monero

As far as I know Monero is private, secure and untraceable however the most valuable feature for me is you can mine Monero using CPU and GPU. I can't afford GPU but lets say I can afford electricity.

You won't do much with CPU minning

That's probably right, but better something than nothing, so far I'm not thinking at this as a bussiness.

After reading about Monero here I decided to create my wallet on mymonero. What I got: 13 words mnemonic phrase (private login key) and a 95 characters line which I guess is a sort of encrypted unique ID, for instance "jHcjtyj767ehh29837..." So far I have created my first Monero wallet with 0.00 Monero on it. Next step is to start minnnig some Moneroj.

For some punctual reason I couldn't get my Linux guest machine available for minning so checked out for a way to use Windows and I found Monero 0.11.1.0 "Helium Hydra" which is a client for Windows. It allows you to create a wallet and also do "Solo minning". But it asks to do a new wallet, why can't I use the first one created on the website? Also instead of giving me a 13 words mnemonic phrase I got a 25 words one. There wasn't a 95 characters line also. Looks clear to me, using the web site you are storing your wallet on the website and using Monero desktop client you are storing your wallet on your own storage. But, if it is a client why just can't point to the web wallet (first one created) address and start minning? 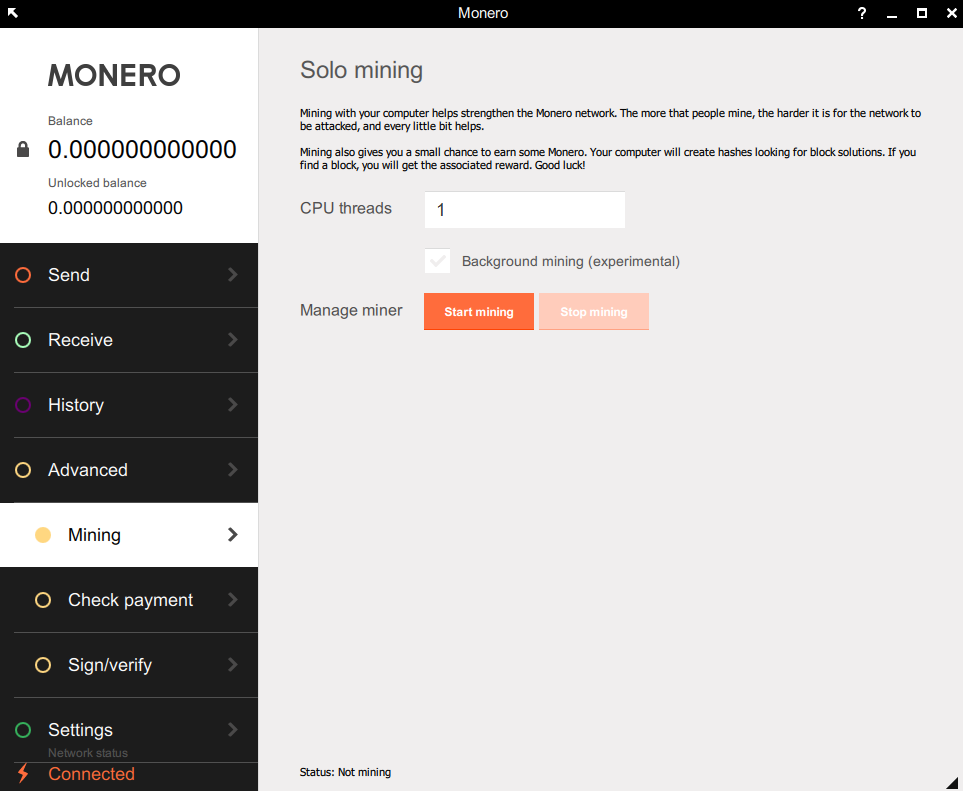 Image above doesn't shows any field to point the web wallet address. So here comes my first "mixed" question:

1- Are Moneroj from first wallet somehow different from the Moneroj inside second wallet? Can I combine then and make it only one wallet?

My first question gives my the chance to talk about my second question and it's related with Pool minning.

As I could see the Monero Windows client only allows you to do Solo minning, not Pool minning. Let's say I start doing Pool minning on any of these pools.

2- Can I point to my first web wallet? If I start minning on for instance pool1.com and then decide to change to pool2.com, the earned Moneroj from first pool are still there?

I have plenty of questions but this should be enough for a beginner.

Browse other questions tagged monero-wallet-gui mining-pools mining mymonero or ask your own question.

4
How to use my 13 word MyMonero mnemonic seed with the GUI/CLI without accessing MyMonero?

7
Mymonero and monero-wallet seed
8
electrum seed word list for monero != official electrum wordlist (english): why?
6
With the Monero Wallet GUI is it suppose to start synchronizing every time you open it even after it completed synchronizing the 1st time i opened it?
4
Using remote node still syncs blockchain?
1
Why is it taking so long for GUI to Sync? My balance is still at zero
2
Graphic card and general questions
0
Mining with xmrig on monero.hashvault - I want to understand what I see on the command line
3
Simple website to check Monero balance
5
How to convert Bitcoin mnemonic to Monero mnemonic?