What does ‘divide CPU cache by 2’ mean? 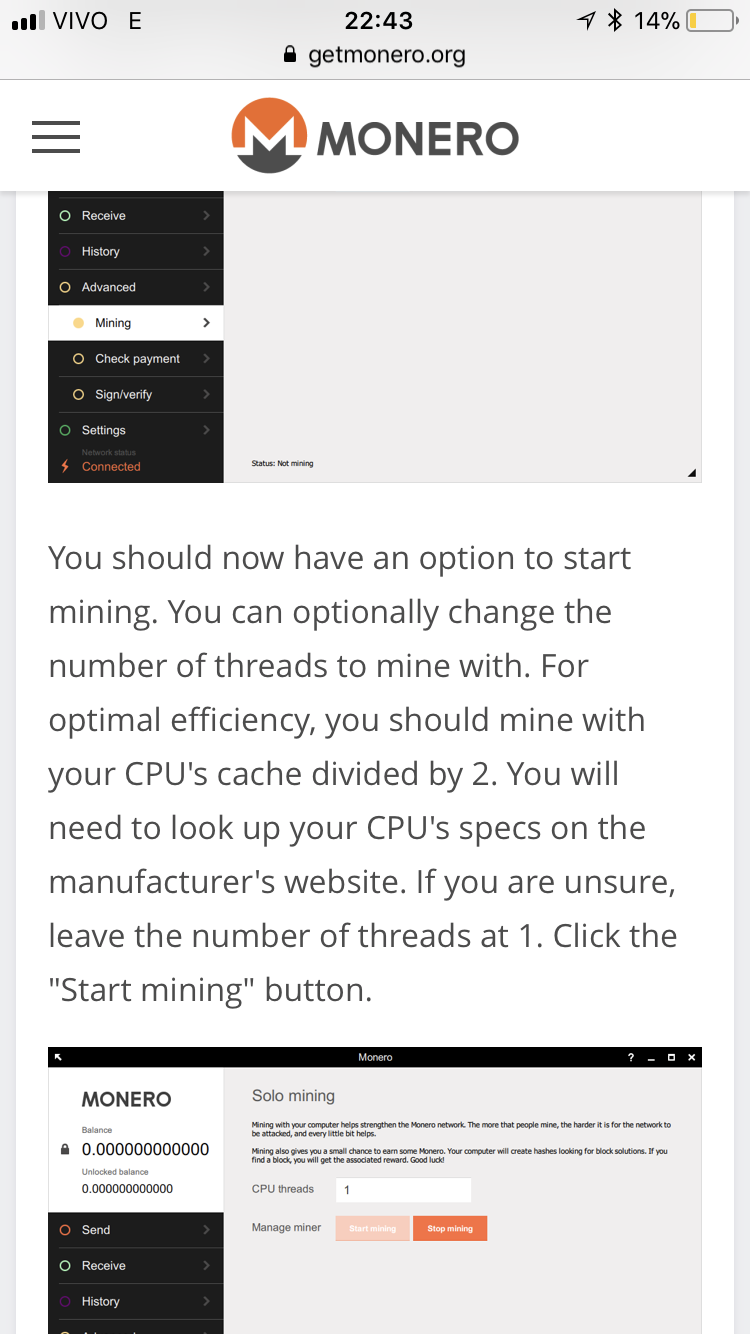 Ok. So I’m thinking about starting to mine some Monero. It will be my first time cryptocurrency mining experience, although I have been trading BTCs for 6 months now.

I have looked over Monero’s website and found a way to mine on my own using its GUI. I have a high-end MacBook Pro (Core I7 3.3GHz) and thought, why not? In this same section, I have came accross something called “threads” and “CPU division for better performance”. I do not want to fry my computer, so given my specs and the picture above, what should I type there where it says “CPU threads”, and then a number “1”? What should be the number?

Cryptonight, the Proof-of-Work (PoW) algorithm used by Monero, uses a 2 MB buffer to do its calculations. Mining speed is heavily influenced by whether this buffer can fit in your CPU's cache. If it can't, some reads and writes will hit RAM, and slow it down. Therefore, to determine the optimal number of mining threads (at least as far as cache is concerned), you work out how many such buffers can fit in your cache. If your cache is 4 MB, then 2 buffers can fit. This is where the "divide by 2" comes from. Note that if you use your computer at the same time as mining, you may want to go with fewer threads, so your normal workload does not get slowed down.

So, you'll have to check your system's specs to see how much cache it has. It's probably between 2 and 6 MB, giving 1 to 3 threads. In any case, it's safe to experiment with small number of threads, and see how your hash rate varies, then use the setting which seems to get you the best performance.

Note that mining using the GUI like this is called solo mining, as opposed to pool mining. In the long run, solo and pool mining give about the same expected mining gains. However, solo mining will be very much more unpredictable in the timing of the gains. It is like a lottery: you can play for a very long time without winning, but when you win, you win BIG. With pool mining, you win often, but only tiny sums. In the long run, it works out about equal, but make sure you are OK with this before choosing between pool and solo mining. Note that solo mining is also better for the network as a whole, as it avoids centralizing mining to the pools.

We need more information to help you out here, you mention you have an i7, but we need the specific version. It will look something like this: i7-7700HQ.

Once you find the specific CPU you have (Macs bury this info), then you can search for it on Intel's website.

Once you find your model number, a page should look like this: 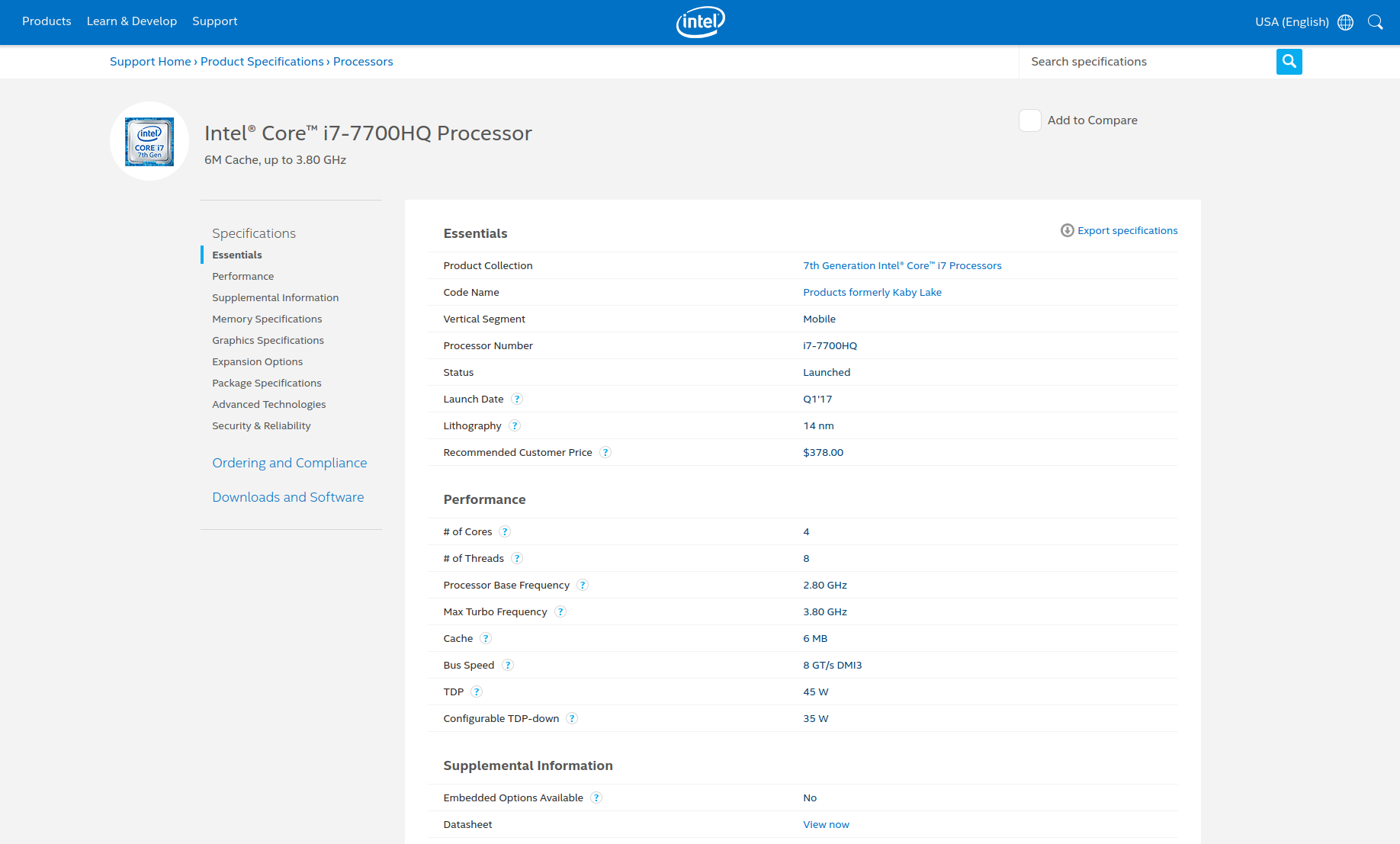 Note in the upper left corner, under the name, is the amount of cache (6M). You can also see this under the performance heading (6 MB).

Divide this number (in M or MB) by 2. In this example, it's 6/2=3. Thus, 3 is the optimal number of threads to use while mining. You can put this in the textbox in the GUI.

Keep in mind that this will likely max out your CPU, which may cause overheating. We suggest you also tick the new option to mine in the background, which will use about 40% of the CPU only when you aren't using it and when the computer is connected to power. Your choice.

If you would like to get more consistency with payouts (solo mining will hardly ever give you money), consider pool mining instead.

Not the answer you're looking for? Browse other questions tagged mining or ask your own question.

3
How does difficulty impact on cpu small mining?
3
Will CPU mining cause high power consumption?
1
XMR-STAK - Does it detect CPU/GPU heat?
3
When mining in a pool what does current effort actually mean?
3
What does the "hashes" field mean in an authentication message received from a pool?
1
Multiple CPU miners with low hashrate vs single CPU miner with high hashrate
1
Does a CPU or GPU mine better on the RandomX algorithm for Monero mining?
0
Most efficent AMD CPU for XMR mining?
0
Wordpress :: mining with user's CPU
0
Server CPU only getting 1.5 to 2.5 KH/s