How do key images really work?

I have the following questions regarding the equation I=xHp(P):

I've found very fragmented information at different places but none of them has an in-depth explanation of how double spends are avoided in monero while preserving privacy.

1. What is the hash function Hp?

The Hp is the hash-to-point function. Result of that would be some random point on the Ed25519 curve. In the CN whitepaper it's defined as:

If I understand well, it takes any point on the curve, and yields a random point on the same curve. The implementation is in the hash_to_ec function. It's not entirely clear to me, but I've written what I could understand as an answer to this question.

Anyways, the definition is clear: a function to take a point and return a random point, so implementation is expected do the same. Anything multiplied with the basepoint will yield a point, and we must multiply it by 8 to get a point on the primary group. There's some info about that here.

It is, and that's not the only requirement - it must also be a point on the primary sub-group of the base-point G. You can check by multiplying with l. If you get the identity element, it's in the G sub-group.

3. Is the value I published with the transaction?

Yes, the value of I is published with each transaction. You can look up any TX on a block explorer and see that.

4. How can an external person verify that the key image has been produced by the owner of one of the transactions, without revealing the identity but at the same time providing double spending resistance (even when the signer chooses two different rings)?

I was asking myself the same thing. Looking at the CN whitepaper again, we see that the ring signature is composed of the public keys + the key image. 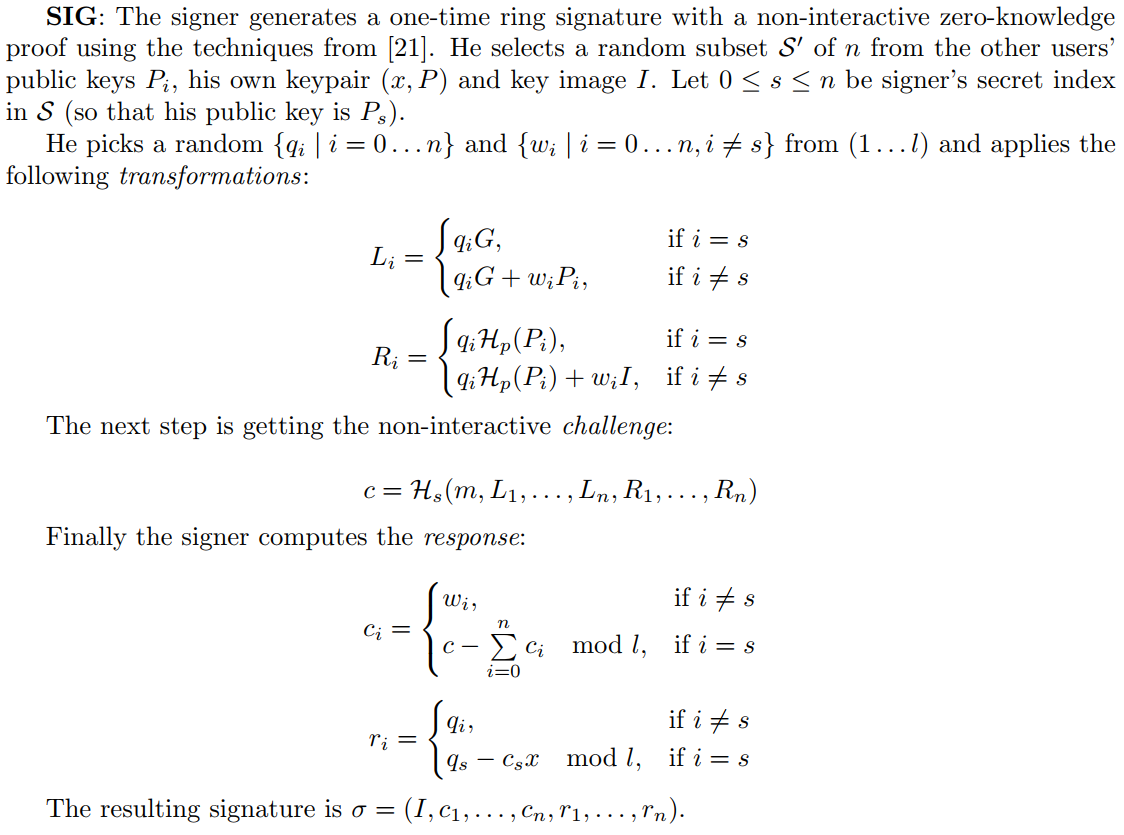 Similarly, the signature checking alghoritm involves key image as part of it.

If the signature is ok, the verifier checks whether it had already been used, effectively preventing double-spends.

Finally, there are some general notes about the whole mechanism.

And that answers the question - the coefficients (r_i, c_i) are used by the signer to prove that he knows such x that at least one H_p(P_i) = I * x^-1, effectively proving that it's one from the ring.

Some more info can be found here in the comments.

Not the answer you're looking for? Browse other questions tagged cryptography cryptonote key-image or ask your own question.

4
What are the “ingredients” of a key image?
5
What is the deterministic hash to EC function used to construct the key image?
10
How to see that the RingCT commitment parameter H is in fact a multiple of the base point G
5
Why is there a multiply by 8 in the hash_to_ec and derivation_to_scalar functions?
2
Is it easily provable by a third party that the key image used in a transaction is associated with the spent output without revealing the (P,I) pair?

19
Can I fake a balance by giving the view key to an auditor but omitting some transactions and key images?
7
Does publishing view key and key images give the auditor the information on where I sent the funds?
5
Can the import\export key images command can be used to check the balance of a paperwallet?
5
What is the deterministic hash to EC function used to construct the key image?
10
Is it safe to share my key images with other people?
4
Key-image generation: What does p signify in I = xHp(P)?
9
How does the recent patched key image exploit work in practice?
1
What keys are being used to create the key image and how is it verified?
2
How does key images work when you create a transaction using two or more of your previously unspent transaction outputs?
1
How is the number of key images for a transaction selected?