How can block size grow over time when miners are incentivised to keep size small?

Miners are penalised if they mine a block that is larger than a threshold.

Miners can make sure that the blocks they mine don't go over that threshold in order to avoid a reward penalty (by adapting the daemon code).

One of Monero's "selling point" is the dynamic block size but since the miners have a disincentive to push large blocks, isn't there a chance that the block size will actually never grow, creating transactions backlog issues etc.?

Example: "normal" transactions use approximately 13kB, the current median block size is 65kB. Packing 5 transactions is just within the median, and the miner gets the full reward. Packing 6 transactions would cause a reward penalty of 0.34XMR. Assuming an additional transaction fee of maybe 0.02, that's a "loss" of 0.32 XMR for the miner.

TL;DR Actually, with the current minimum fee, there's an incentive for 0.6% growth as long as there's enough transactions coming in. Problem is not in the formulas themselves, but in the typical transaction size / min. block size ratio.

The penalty formula has an optimum block size increase for a set of transactions offering any given fee, see figure below. 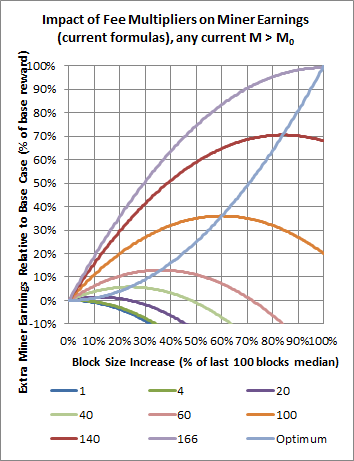 The formula works well in the ideal case, where miner would be able to build a block targeting any % increase. If that was the case, for everyone paying the current dynamic minimum fee, the optimum would be 0.6% increase above median. A 1.2% increase would be neutral to the miner, ie he'd get the same total reward as if he just mined a full block without increase.

Problem is, the minimum feasible block size increase is around 20% (adding just 1 typical RCT TX above median). It would be rather hard for a miner to combine such transactions to consistently give an increase of 0.6% above median. He is then left with a simple choice: to add 1 TX above median, or not to. And with the minimum fee, the economical choice will always be not to add. The problem would go away by itself if the blocks would somehow expand above some threshold, as seen in the figure below. Problem is in getting there in the first place.

Currently, to make it neutral for the miner to add just one TX it would mean almost everyone would have to offer around 5$/TX with the current prices. One could argue an user would rather give up transacting then to pay such a fee, unless we're talking about very important transactions.

However, it is planned to fix this with the next HF. There are a few options:

Not the answer you're looking for? Browse other questions tagged mining-theory dynamic-blocksize-limit block-reward or ask your own question.

3
How can the network or monero community reduce the txpool size?

10
How is the quadratic miners penalty calculated
6
How does block time depend on number of transactions and block size?
3
Why does mining generate new coins on a fresh testnet?
3
Reward penalty: how to control the block size?
9
Does the dynamic blocksize limit and penalty function lead to a tragedy of the commons?
7
Why is there a penalty on large block sizes?
6
Will a large and sustained increase in Monero transactions resolve the current issues of the dynamic block size penalty function?
3
Why are pools not mining large blocks?
2
Block reward and transaction fees over time