I am trying to understand how block rewards have evolved over time in Monero. I downloaded the blockchain and plotted the reward field from each block. Because it looked a bit strange, I plotted the major versions from the blocks as they first appear on the same chart to see if it helps: 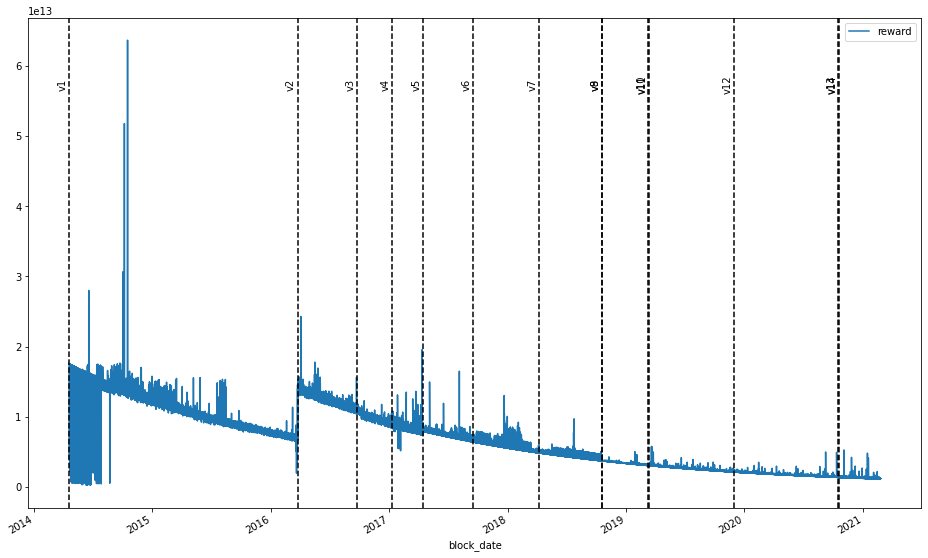 The trend is declining as one would expect. However, there are a few things I do not quite understand in this:

Are there some changes over time on how the block reward (and associated fees) change over time? Are such changes over the (major) block versions documented somewhere?

Why does the reward look like it resets at the point where major version 2 appears in the block? I could not find any explanation for this, maybe because it is a bit long time ago.

The block time was increased from a targeted one minute per block to a targeted two minutes per block in the scheduled upgrade of March 2016. In order to properly retain the original emission schedule (and thus not change the social contract of Monero), the block reward had to be doubled. Your graph essentially reflects that.

Not the answer you're looking for? Browse other questions tagged transaction-fees block-reward or ask your own question.

4
Transaction rejected by daemon with status: Failed Error: Reason: fee too low
3
How do fees affect tx priority and how did these specific high fee tx's sit unconfirmed for > 1hr
1
Where is the public key/output for the miner reflected on the blockchain?
2
Understanding block reward calculation
9
How can block size grow over time when miners are incentivised to keep size small?
3
What's the explanation for certain high fee transactions/blocks?
4
How do I figure out how much a share is worth in the PPLNS world?
0
Would a long-time block target be annoying?
2
Updated dynamic fee calculation?
1
How to get a block reward from a block template?