I was doing a research on building a monero mining rig and found this site where they benchmarked some hardware and their respective hashrate, and also using a online mining calculator it seems that is not worth, taking for example a AMD THREADRIPPER 3990X which according to their site has a hashrate of 64Kh/s and puting those data on the mining calculator it still not worth it: 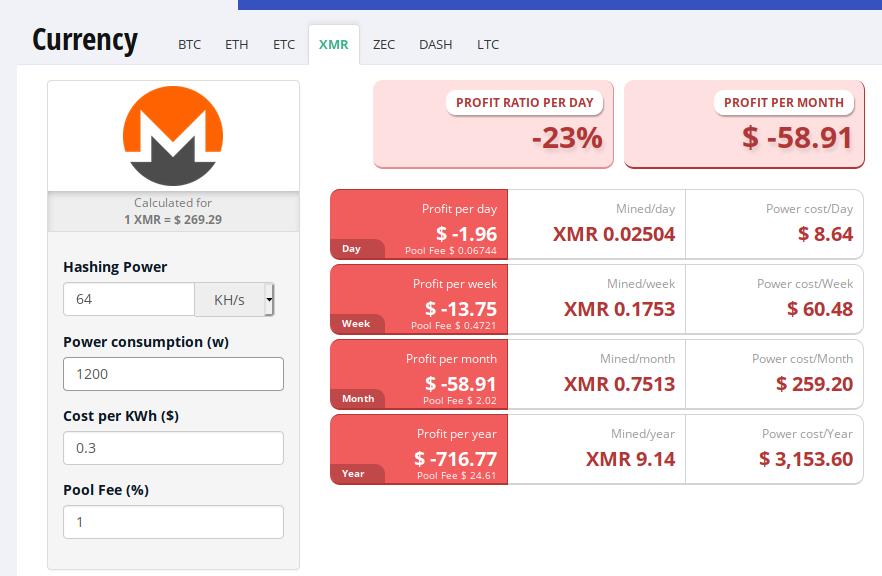 So my question is, am I doing something wrong in this calculation or does it still worth mine it? Or maybe, is the benchmark values wrong? By the way, I was thinking about using a geforce 970 which is inferior to the threadripper quoted but I didn't found the hashrate for it...

It's "worth it" profitability wise if your cost of running is less than the revenue you can make. Thus you need cheap electricity / low power consumption system. This is why many people mine using AMD Ryzen 3000 series CPUs; the hash/watt ratio is high.

So my question is, am I doing something wrong in this calculation...?

If you're going to use some random online calculator, make sure you put in accurate values and double check the calculations yourself. For example, your system power consumption is probably not 1200W, unless you also have a couple of power hungry GPUs in it. Your electricity cost probably also isn't 30c kw/h as that's higher than even NYC; if that really is your power cost, then mining Monero almost certainly will be unprofitable for you.

As others have said, you will likely have higher electricity costs than revenue. A few years back when I tried this, I found that my hash rate was several orders of magnitude below where I would see any real amount of money coming in. Especially now with the run on cryptocurrencies due to the lockdown crisis, the demands on miners are rising. That being said, Monero seems underrated in relation to other coins, which are not private and therefore in my humble opinion have no long term viability. I'm surprised it's not at several tens of thousands, like Bitcoin. I guess it's mostly a question of who gets mentioned in the media. In that sense it might be worth having some. But maybe the state will shut it down "because terrorists", and then you will lose your investment.

Edit: I now understand that Monero is just a fairly standard CryptoNote implementation, of which there are many. As such it is rather overpriced than under. They are just good at marketing.

I second what jtgrassie answered, but with one caveat. If you are mining and plan to hodl the mined XMR, you don't have to make a net profit right away. Granted we are seeing some great price appreciation lately, I would assume a conservative yearly price appreciation on average over time compared to this last year, or even this year so far. Still, this conservative annual return percentage us much better than keeping that money in USD or some other depreciating asset comparatively. Plus, with XMR, the privacy benefits can't be ignored.

Not the answer you're looking for? Browse other questions tagged mining mining-hardware or ask your own question.

6
Hardware and Monero Mining
1
Mining aeon but the balance is still zero
7
How can I Mine Monero using a Processor in Memory PCIe Card?
3
Help to Setup a Monero mining farm $4000 Budget
3
Do you experience much more crashes/restarts of xmr-stak with the latest 2.3.0 version (Vega 64 rig)?
1
Optimizing xmrig
0
Hardware for Monero mining hash rate of 1 MH/s