What is the difference between Monero (XMR) and Ryo (RYO)?

I would like to have a comparison between the privacy features of Monero vs Ryo. I have heard some people say that these are privacy-oriented coins, and I would like to learn more.

Sumokoin is forked from the source code of Monero cryptocurreny, one of the most innovative digital coins which is well-known for security, privacy, untraceability and active development, therefore, naturally inheriting all of those great features, yet without the burden of its past.

Sumokoin (SUMO) launched following the initial release of the "An Empirical Analysis of Traceability in the Monero Blockchain" paper released on 13 April 2017. While this paper introduced a number of Monero privacy limitations, the majority of them were limited to pre-RingCT outputs, ones that Monero had not used in meaningful numbers since January 2017. Future transactions were subject to the "guess-newest" heuristic for some time after, but Sumokoin (SUMO) did not change the selection algorithm. Thus, the claim that the fork removes the "burden of [Monero's] past" is dubious, since there was no practical benefit to Sumokoin (SUMO) transactions at the time of launch.

According to the Ryo roadmap, the following occurred in June 2018:

Sumokoin hardforked to ASIC friendly POW and Ryo continued on with the original chain.

Ryo began on a largely Monero codebase and merged a number of upstream features, including multisig, fluffy (compact) blocks, and bulletproofs.

Monero and Ryo use their own custom Proof of Work (PoW) algorithms.

I haven't found a good resource that reports the number of Ryo transactions per day, but I estimate there are less than 500. Monero typically has >4000, so there is a greater total number of other transactions that match various spend behaviors. Of course, users should reduce their exposure by avoiding payment IDs whenever possible.

Monero uses ringsize 11. Ryo uses ringsize 25. Ryo proponents argue that larger ringsizes are better, which is strictly true. I have included a graph below indicating the proportion of rings that would be compromised (y-axis) if attackers had knowledge over a certain proportion of outputs (x-axis). Both cryptocurrencies provide essentially the same protection until 65% compromised. The larger ringsize protects similarly until about 82% compromised. This buffer of protection is useful. 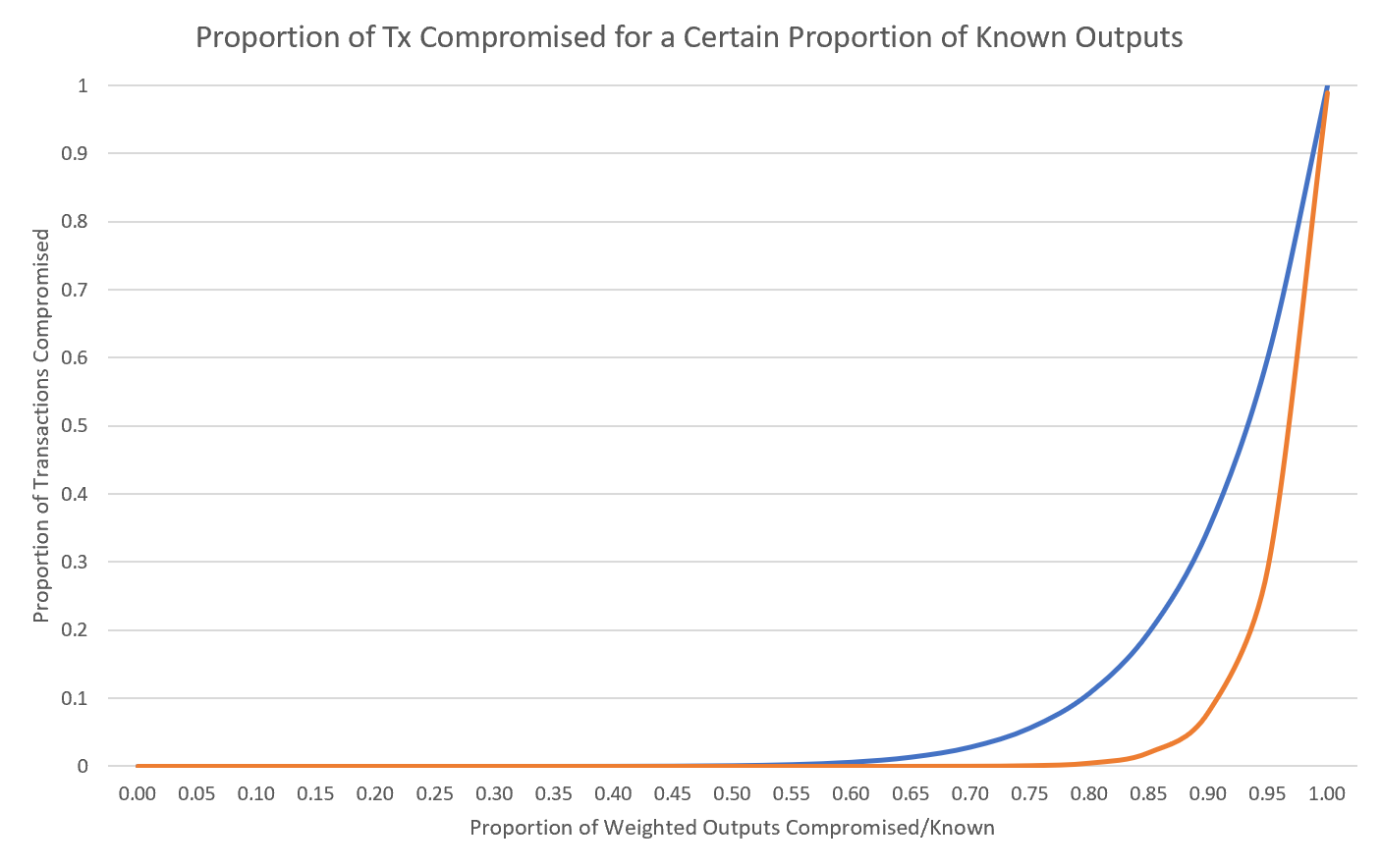 Larger ringsizes may be better for privacy if you compare a small vs. large ringsize for a single network. However, large networks naturally have better protection from the other transactions and their entropy. Small cryptocurrencies need larger ringsizes to provide the same privacy level according to this one metric. There are many other metrics of assessing relative privacy levels, but this is one for a basic form of attack.

Ryo imposes some stricter transaction restrictions on the consensus layer in some cases, which prevents malicious or oblivious wallets from sending some types of revealing transactions.

Monero and Ryo are very similar, since they share most of the same code. Only a few parameters are changed between them. However, any changes to the code are relatively minor if the network is significantly smaller. Ryo has some strict improvements, but they need to weighed against Monero's larger network size. Comparing certain parameters in a vacuum without considering the wider network situation leads to false conclusions.